ATHENS –The Georgia Bulldogs held a 2 1/2-hour workout on Saturday afternoon, working out in pads for the first time of the spring football practice period.

‘’We’ve had three good days.  I think the guys have had a lot of energy out there at practice.  A lot of enthusiasm.  I thought today was the best, obviously, because we had pads and we had a good audience out there, with a lot of prospects.  So I’m excited about the progress we’ve made.  We’ve got a long way to go.  We’re probably not as deep as we’ve been on the defensive front, where we need to be.  We’ve got a lot of offensive linemen competing for for a lot positions.  Some young DBs that have got to grow up.  Seems like there are a lot of experienced wide receivers out there everywhere.  Obviously Jake (Fromm) has done a good job.  He’s got command of the offense, and Justin (Fields) is picking it up very quick.  Very bright.  And Stetson Bennett has been doing a good job as well.  So I’m pleased with the progress we’ve made.  We’ve got to continue to do that.  That was a good, physical practice out there today, and guys competed.

A. ‘’I don’t know.  I think last year, with no Brice (Ramsey), you felt like there was not a ‘3’ there evident.  I think Stetson (Bennett) being that he’s done what he did through fall camp, the season (being the scout team guy), and then the bowl practices, getting to work, I feel like we’ve got three guys there that are really competing and doing a good job.  I think it’s a little different.  I think Jake obviously played more games than Jacob did, with the success we were able to have, getting the extra games.  He’s picked up things well. And Justin is a very advanced quarterback, similar to how Jake was coming in.  So those guys have done a good job picking it up.  I’m extremely pleased with the leadership that both of them provide and also how they push the defense.  I mean, Jake’s out there competing each day.’’

Q. What are your impressions of the inside linebackers so far, in the absence of Roquan Smith?

A. ‘’You see things show up.  Certainly not having him there, there are things that pop up.  I think there are good players there.  There’s not maybe a dynamic player, but they’ve got to do it by committee.  You know, we’ve got pretty good backs still.  You look at Swift, Holyfield and Herrien.  Coming out of the backfield, they’re hard to cover.  So there have been some plays made where it was like, ‘Uh oh, that guy didn’t cover that guy like 3 used to.’  So they’ve got to improve that, but I do like that group.  Coach Schumann challenges them each day.  We’ve been rolling them, who goes with the 1s and 2s and 3s, because there’s really no defined starter, in my opinion.  There are literally six guys competing for two starting spots, and there’s nobody that’s a starter there.  Nobody that’s really played a lot.’’

Q.  What are your impressions of Andrew Thomas having moved to left tackle?

A. ‘’I probably haven’t paid as close attention to it as much as I should.  It’s hard to say in shorts, with today being the first day in pads.  I do know this.  If you don’t notice him, it’s probably a good thing.  It’s not like there’s popping up sacks and things.  It’s very quiet.  There aren’t a lot of issues there.  We haven’t gotten a lot of pass rush off that side.  He’s made the transition well.  I think Coach Pittman has done a good job, leading up to this, of walk-throughs, knowledge.  We had bowl practices where we just worked on us, and he flipped over and played two or three practices.  So it’s not foreign to him.  He’s done a tremendous job. The challenge for Andrew is, can he become a vocal leader, not just a leader by example?  He’s got to learn to push other guys, challenge other guys, along with Lamont (Gaillard).  And I think he can be that kind of impact leader.’’

Q.  How stark is the difference in the character of this defense, compared to last year?

A. ‘’It’s hard to measure right now because we haven’t hit adversity.  When you’re in no pads, it’s hard to create adversity because there’s no contact and there aren’t a lot of big plays.  You don’t really know if they got it or not.  Then today, it was a little chippy out there and guys were hitting, and I thought the defense — on the first day today — was better than the first day last year.  I know y’all still don’t believe me, but last spring was — I don’t know the right word — horrible, maybe, for the defense, because Roquan wasn’t there and Trenton (Thompson) wasn’t there and we really got outphysicaled.  But that wasn’t that way today.  But it does scare me that it could be that way some days because we are a little older, more mature on the offensive line, got a good quarterback.  We’ve got to get better on defense.  There are some holes out there.  Got a lot of young DBs.  Divaad Wilson got injured today.  I don’t know the status of that, but that’s disheartening because he had had three really good practices and i was really fired up about him.  We’ll have to wait and see what the injury is.’’

Q. Who has been working at the Star position and how important is it to define that role that Aaron (Davis) played?

A. ‘’It’s like 80 percent of what we do.  Tyrique McGhee is a really good Star, but he’s not real big.  He’s a physical guy, but he weighs 180 pounds and in our league, we’re gonna have to get creative there.  Last year it was a struggle.  We had to play Lorenzo (Carter) some.  Walter Grant is a guy that plays that position well and hopefully he’ll be able to help us there.  If William Poole, Tyrique McGhee, all those guys you see us out there in pre-practice working with.  Those guys are all trying to find a role.  And Jaden Hunter may be a guy because he’s athletic and can play in space.  We’re gonna keep trying to put the best 11 on the field.’’

Q. With Christian Payne gone, will you still use that fullback position this year, like last year?

A. ‘’We had it last year where the backup was a tight end.  In most traditional fullback offenses, you use tight ends in that role as a backup, because you only get to travel 70.  So we’ll keep those portions of our offense.  We think those are good weapons to have, but it’ll be done by committee.  It’ll be done by Jackson (Harris), (Isaac) Nauta, all those guys…Charlie (Woerner).  We’ll also have guys coming in the fall who can help with that.’’

Q. Without any defined ‘stars’ on this year’s team, compared to last year, how is that affecting the chemistry of this team?

A. ‘’I think it’s good.  I mean, I don’t think those guys (Chubb and Michel) ever saw themselves as superstars.  We certainly didn’t treat them that way.  They didn’t behave that way.  They didn’t practice that way.  So nobody in this program plays or practices with an entitlement.  That’s my ultimate goal, so I’m looking for the entitlement guys every day at practice, to see if they feel that way.  And challenge them to compete.  Whether we have a superstar, or as you call, a first-rounder, I don’t know that.  I know we’ve got a lot of kids out there competing, trying hard.  We’ve got a long way to go.  We’ve got a lot of guys.  If you take the snaps that we’ve got to replace, especially on defense, we have a long way to go.  But I enjoy coaching this group.  They’re like sponges.  They absorb.  So far, they’ve had the eagerness that you’d like them to have.’’

Q. Who are you seeing emerging as leaders at the wide receiver position?

A. ‘’Terry (Godwin) and Riley (Ridley) and Mecole (Hardman) clearly have a presence about them, a confidence about them.  They were able to make some plays last year.  I thought they last 2-3 days, the thing that stuck out to me is that Jayson Stanley, Tyler Simmons, Ahkil Crumpton, (Michael) Chigbu have made some plays.  Matt (Landers) is growing up.  He’s trying to push through.  But I tell you, those guys — Kearis (Jackson), and JJ (Holloman) — they’re not sitting there just learning what to do anymore.  They’re challenging the guys in front of them.  The volume of reps all those ‘2’ receivers took last year is really paying off.  Because our ‘2’ receivers are ahead of a lot of our ‘2’ DB group.  That’s a bright spot that I feel like we’ve got a pretty good depth of receivers.  They helped us a lot on special teams last year.’’

Q. You’ve got a star-studded list of NFL-related speakers at your coaches’ clinic and seem to embrace the connection with the NFL.  Is that something you try to promote?

A. ‘’If you go to the core purpose of it, the point of a coaching clinic is not to raise money, not to make money.  It’s to promote a game that I love, that I think has been really good to me.  But it’s also great for kids.  It’s great for student-athletes.  You think about the opportunities that our players got to go to the University of Georgia and play football and get an education.  That’s invaluable.  So we’re trying to give back to the high school coaches in Georgia, and really all over the country.  We’ve already got 700 registered, more than we’ve ever had, expecting over 1,000 high school coaches for a clinic where no Georgia clinic has ever had over 500.  My expectation is to put on the best clinic in the country because I think I’m at the best university in the country.  So we’re going to put the best speakers out there. We’re going to let them come talk.  They’ve already made a rule where we can’t have a high school coach come speak.  So when you take that away, why would high school coaches want to come to our clinic if they can’t watch other high school coaches speak?  You’d better have a star-studded cast to get ‘em to come.  I think giving back to the coaches through our drills — we’re gonna let coaches be able to sit in our meetings and learn.  Not many people are willing to do that in our clinic, but I’m trying to give back to them because they’re our feeder program.  The state of Georgia has the best high school coaches in the country because our state education system is such that they get good benefits, they get good pay, so if they’re developing tough, hard-nosed, disciplined football players, guess who I get to inherit?  Those guys.  So it’s somewhat of a minor league for us.  I really believe that you should give back to them.  Coach (Bill) Belichick was like, ‘Absolutely, I would love to come speak at your clinic because you’ve got one of the best states in the country to play football in.’ (Sean) McVay and Dan Quinn were the same way.’’ 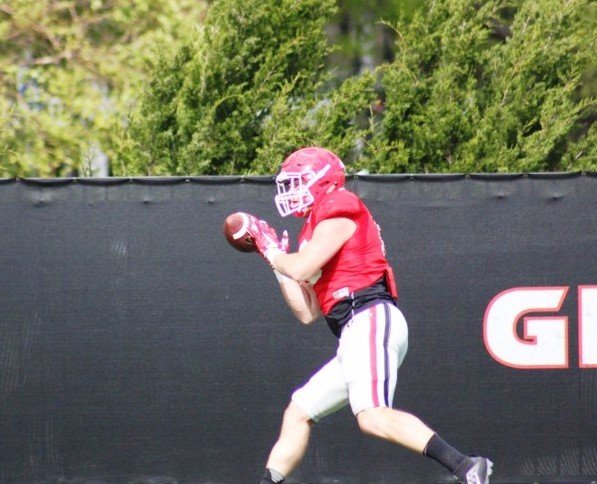 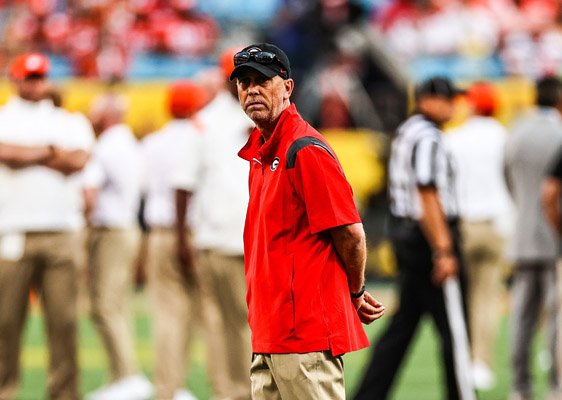 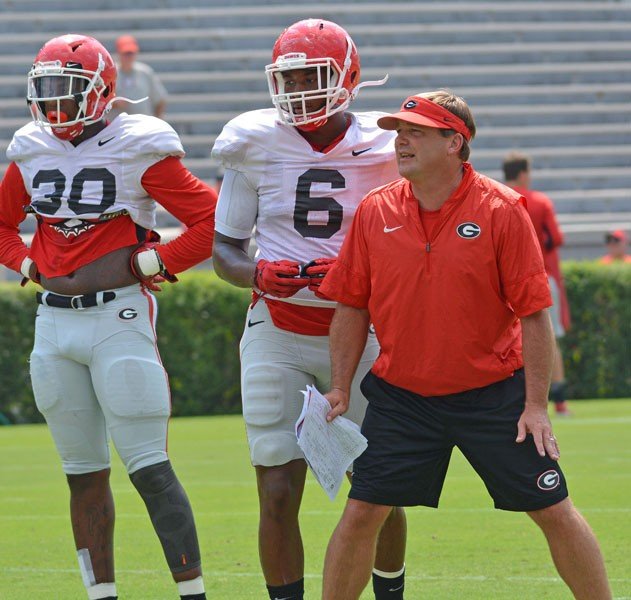 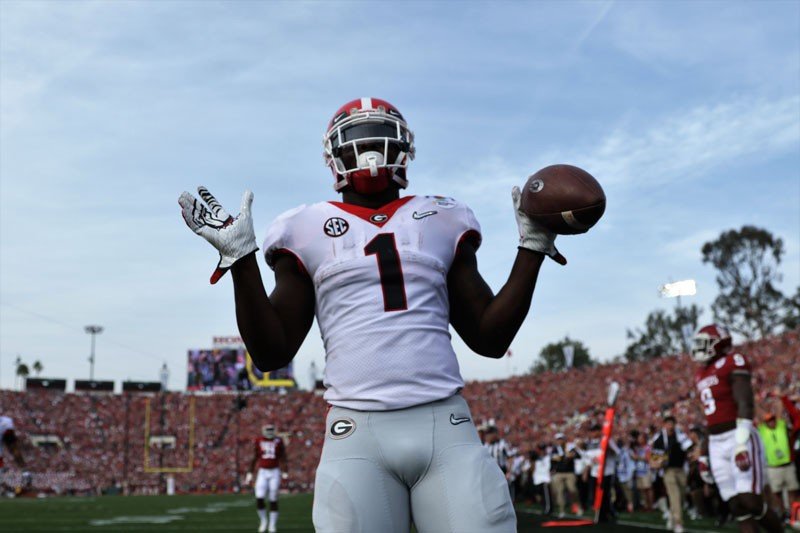 Bulldogs in the NFL — Week 8