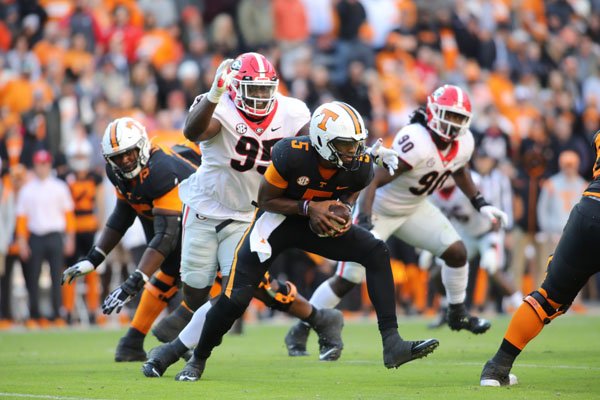 KNOXVILLE, Tenn- The top-ranked Bulldogs (10-0, 8-0 SEC) score 34 straight points to pull ahead of the Volunteers (5-5, 3-4 SEC) 41-17 in front of a packed Neyland Stadium and CBS audience. The Bulldog’s finish SEC regular season play unbeaten for the first time since 1982 and finish 8-0 in conference play for the first time in program history.

Head coach Kirby Smart on the 8-0 SEC record- “That’s where we’ve gotten. It makes no guarantee for what’s going to happen in the future. We’ve got a lot of guys we have to get better. Nobody thinks they’ve arrived, there’s things we can work on to get better at and they’ll continue to do it.”

Stetson Bennett finished the game 17-of-29 passing for 213 yards and touchdown. Stetson also finished with 40 rushing yards including a touchdown on the ground. Kirby Smart said, “I thought his feet were a big difference in this game. His athleticism and the play he made on the touchdown run was special.”

James Cook tied a career high in rushing yards with 104 yards on just 10 carries while also adding 2 touchdowns on the ground. Cook also finished the game with 43 receiving yards and a touchdown through the air. Adonai Mitchell led the team in both catches and yards as he added 65 yards on 5 catches.

Kirby Smart on the play of the linebackers- “Linebackers are really good players, even better leaders, and well coached. We’re certainly going to miss them when they’re gone. Nakobe, Channing, and Quay have no ego’s and it’s another microcosm of the entire team.”

Following a Georgia three-and-out, Tennessee drove inside the Georgia 20-yard line before turning the ball over on downs. The Bulldog offense responded with a 13-play, 74-yard drive resulting in a 26-yard field goal from Jack Podlesny extending the lead to 27-10. The drive was sustained by several successful rushes from James Cook and Kenny McIntosh.

Georgia’s defense forces the second straight turnover on downs as Nolan Smith hits Vol quarterback Hendon Hooker in the backfield before Channing Tindall eventually forced him down. The Volunteers converted a fourth down earlier in the drive, but a Channing Tindall sack on second down made their second attempt more difficult.

A 5-yard touchdown run on Georgia’s 7th-play following the Tennessee turnover gives James Cook his 3rd touchdown of the day to extend the Bulldog lead to 34-10. James Cook breaks the 100-yard rushing mark for the second time in his career with the touchdown run.

The third drive of the half for the Volunteers starts with a 51-yard catch-and-run to Cedric Tillman. Four plays after the Volunteers convert a fourth-and-8, Channing Tindall strip sacks Hendon Hooker to give the Bulldog offense the ball back with just under 11 minutes remaining in the fourth quarter. Travon Walker recovers the fumble and immediately steps out of bounds at the Bulldog 27-yard line.

The Bulldog offense followed the defensive stop with a 6-play scoring drive ending with a 5-yard rushing touchdown from Kenny McIntosh to extend the lead to 41-10. All 6 plays of the drive were on the ground as Zamir White rushed for a combined 30-yards while Brock Bowers took a tight end reverse for 24-yards to set up the touchdown.

Joe Milton entered the game at quarterback for the Volunteers and connects with Cedric Tillman for a 53-yard gain down the sideline. On the drive’s 10th-play, Milton connects with Tillman again for a 12-yard touchdown cutting the Georgia lead to 41-17 with just over 3 minutes remaining in the game. Tennessee would regain possession following a Georgia punt, but have time run out giving the Bulldogs a 41-17 victory.

Georgia returns to Athens to take on Charleston Southern next Saturday in what will be the final home game of the season for the Bulldogs.

Please see Bulldogs Take 24-10 Lead Into Halftime on Volunteers for first half recap. 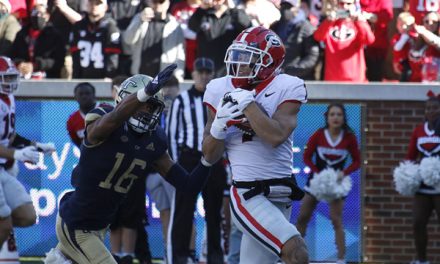 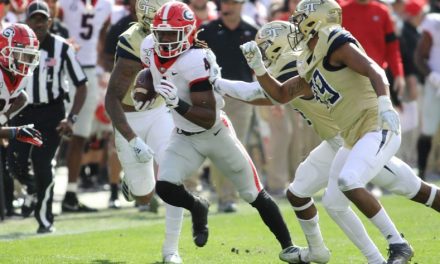 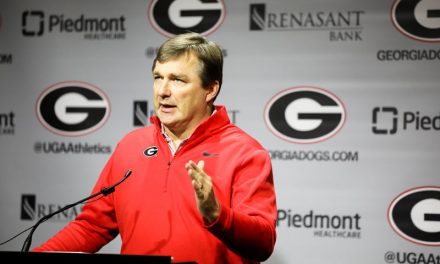