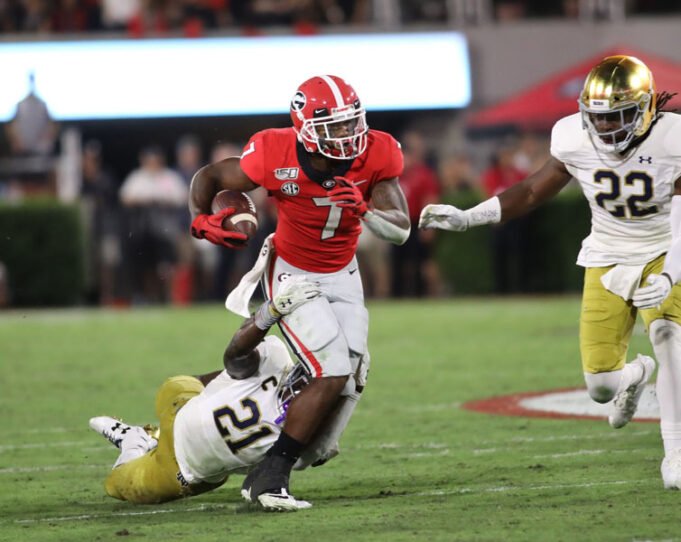 On his reaction when he knew he would be selected by the Lions: “Just relieved, excited, happy, blessed, everything all in one. Just so many emotions going through my head – just to get that phone call. I’m just blessed, happy to be a Lion.”

On what he knows about RB Kerryon Johnson and how the two of them will be in the backfield together: “I know a lot about him. He had a great career in college – him and Bo Scarbrough. I’ve seen them first hand. He’s done great in the NFL, too. So just to go in there and build a relationship with them type of guys – I’m just looking to compete for whatever role is fit for me. I’m looking forward to meeting all my teammates.”

On the Lions’ having multiple SEC running backs and what that says about the conference: “It’s amazing – that just speaks volumes to the conference. I think some of the best players come through the SEC. I think it’s one of the higher conferences in college football. Just to have an all SEC backfield, that’s just a blessing.”

On what he knows about QB Matthew Stafford: “I have definitely seen him play, coming from Georgia – great quarterback. Looking forward to meeting him as week and build that relationship.”

On why Georgia has produced so many good NFL running backs: “Just how they prepare, how they prepare their backs and every position. Keep them ready for the next level no matter what is thrown at them – prepared mentally, physically. So it’s preparation.”

On what it means to be a part of the Georgia running back lineage in the pros: “Amazing. Just to have my name mentioned with those guys – they’re legends. I just have to do my part, so I can be talked about with them further down the line.”

On if he takes pride in his pass-protection: “Yeah, I think you have to. I think I was put in more of a position last year to kind of solidify it and kind of help complete my game so that teams can see that. That’s something you can definitely always work on and get better at.”

On what he knows about the Lions: “The first thing that came to my mind was Barry Sanders, he’s my favorite back of all-time. I didn’t really know too much about them. I don’t have a favorite football team, I just like watching football in general. Now that I’m a Lion, I’m going to definitely do my history.”

On if there’s something about his game he didn’t show at Georgia but can in the NFL: “I think just getting into space a lot more, but at the running routes in the slot versus whoever. Just being able to use my abilities to really showcase my talents, I think I can do that a lot more as far as getting in space and just getting mismatches and stuff like that.”

On how he was able to watch and learn from Hall of Fame RB Barry Sanders: “Well, everyone would always talk about him. I started watching film and highlights and just looking at his stats. (It’s) kind of unbelievable. As I got older, I tried to emulate my game to be like his in any way possible. I just love watching him.”

On if he thinks he can be the Lions’ first 1,000-yard rusher since 2013: “That sounds good whenever it comes down to it. Right now, I’m just looking forward to meeting the team and just competing for whatever role they think is best for me right now.”

Please consider the environment before printing this email.