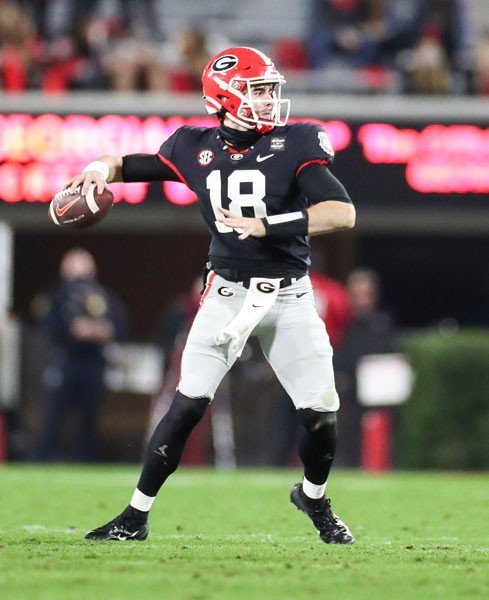 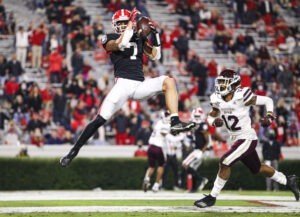 ATHENS, Ga. – The 13th-ranked Georgia Bulldogs defeated Mississippi State Saturday night 31-24 under the lights of Dooley Field at Sanford Stadium in front of a crowd of 20,524 and a nationally-televised audience on SEC Network.

In his Georgia debut, redshirt-sophomore quarterback JT Daniels completed 28-of-38 passes for a career-best 401 yards. Daniels became the first Georgia quarterback to pass for 400 yards since Aaron Murray against Auburn in 2013. Daniels is the seventh Bulldog to throw for at least 400 yards in a game.

“First off, hats off to Mississippi State and Coach Mike Leach and his team,” said head coach Kirby Smart. “To come over here and have some guys down and go out and play the way they did; I thought they played with a lot of heart and a lot of fight. What they were able to do defensively in terms of stopping our run game, we knew the guys they had played up front play really hard and physical, they do a tremendous job of making you one dimensional and I give them a lot of credit for that.”

Smart added on his starting quarterback, “What JT did, he said ‘Coach, I want to come down to the scouts and I want to throw, and I want to be part of the game plan.’ And he came down in front of me and went every day against what I think is a pretty good defense and he made plays and moved around the pocket and he started showing us that ‘I can do this thing’ and he took the bull by the horns and he took advantage of it tonight.”

Daniels’ go-to receiver was freshman Jermaine Burton, who tallied career-bests with eight catches, 197 yards, and two touchdown catches. His 197 yards ranks fourth best in Georgia history for a game and the most since Tavarres King set the record with 205 against Michigan State in 2012 Outback Bowl. Sophomore George Pickens also added a touchdown catch, one of eight total catches for 87 yards. As a team, Georgia’s 401 passing yards was a season-high, topping the mark of 269 against Alabama.

All five drives (three Georgia drives, two Mississippi State) in the second quarter ended with a score for each team.

On the sixth play of the quarter, Daniels connected with Pickens on an 8-yard touchdown pass for Daniels’ first TD pass as a Bulldog. It was Pickens’ team-leading third TD catch of the season. A successful PAT put Georgia (5-2, 5-2 SEC) ahead 7-3. Georgia’s scoring drive took 5:14 and spanned 69 yards.

Mississippi State responded by putting together a 14-play, 75-yard, 7:04 drive concluding with a 4-yard touchdown rush by freshman Dillon Johnson to put MSU back in front 10-7 with 5:24 to play in the opening half.

Daniels jumpstarted Georgia’s next drive with a 49-yard pass to Burton. The play topped Burton’s previous season-long catch of 36 yards at Alabama. Mississippi State was able to halt Georgia after the big play and the drive concluded with a 41-yard field goal off the foot of redshirt-sophomore Jack Podlesny to tie the game at 10 all.

A 51-yard catch-and-run by MSU freshman Jaden Walley into the end zone on the responding drive gave Mississippi State the 17-10 advantage.

Georgia’s next drive began with just 1:22 to play in the half. Daniels went to Burton again, this time completing a 46-yard pass to the freshman to put the Bulldogs in MSU territory. An 18-yard TD pass, once again to Burton (his second of the season), tied the game up at 17-17 with just 30 seconds left in the half. The score stood as both teams went to the locker rooms at halftime.

At halftime, Daniels had completed 13-of-17 passes in his Georgia debut for 204 yards, 149 of which were completed by Burton on seven catches, already a season high in both for him.

Georgia began the second half with the ball. On second down just inside MSU territory, Daniels dropped back and aired out a 48-yard pass to Burton in the end zone for Burton’s second TD catch of the night. After the PAT, Georgia led 24-17.

Once again, Mississippi State responded with an 11-play, 75-yard scoring drive, this time completing the sequence with a 3-yard rush by Johnson into the end zone to tie the game at 24 in the third quarter.

The third quarter concluded with the game knotted 24-24.

Georgia regained its lead at 31-24 with 9:50 to play in the game on a 40-yard touchdown pass from Daniels to redshirt-freshman Kearis Jackson, the fourth TD pass of the game for Daniels, a new career-best. The play also tipped Daniels’ career best with 370 passing yards at the time.

Next up, Georgia travels down the road to Columbia, South Carolina for a matchup with the South Carolina Gamecocks next Saturday, Nov. 28. Kickoff is slated for 7:30, ET, on SEC Network. 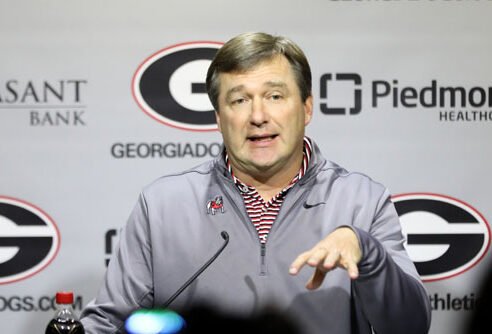