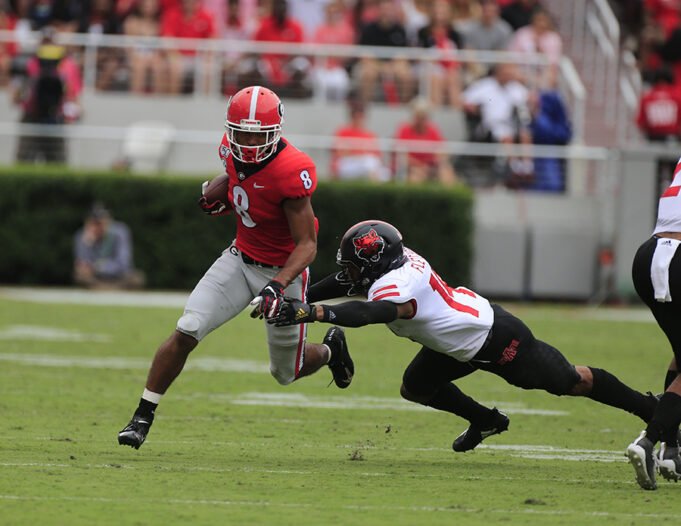 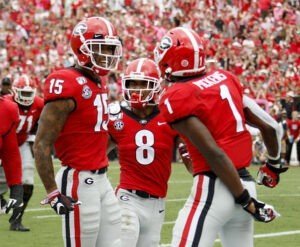 ATHENS- No one could have blamed Georgia, if they did not show up like they did in a 55-0 win over Arkansas State. The real game is next week in Athens.

All week leading up to this game, Kirby Smart talked about the Red Wolves as a team that could cause problems for the Bulldogs. If they could, then the players did not let many of their positive attributes show.

The brightest part of the Georgia win, was the coming out party for freshman wide receivers Dominick Blaylock and George Pickens. Both led the team in catches with five for Pickens and and four to Blaylock.

Blaylock’s performance today, comes just two weeks after he registered a ‘did not play’ against Vanderbilt to open the season. He showed UGA fans exactly how explosive he can be as a wide receiver, when he broke off a 60 yard catch and run touchdown in the second quarter.

Pickens was targeted by quarterback Jake Fromm with two deep passes early in the game. Both fell incomplete.

The freshman wide receiver from Hoover (Ala.) High was soon able to dazzles Georgia fans with his skillset. This included a 12 yard catch against the Bulldogs sideline, where he need to “tightrope” his way to pulling in the reception.

The two freshmen were not the only ones who were stars in this win. Graduate transfer Lawrence Cager also showed that he can be relied upon in the passing game.

Cager was able to pull in his first touchdown catch of the season, when Fromm found him from five yards out at the end of the first half.

The Miami transfer also helped Blaylock spring for that long touchdown, with a block on the perimeter. He also appeared to drive his defender into the end zone, when running back James Cook scored on a 37 yard run in the third quarter.

As an offense, Georgia was able to post 656 yards of total offense on 66 plays. They would have an even split of plays in 33 runs and 33 passes.

This game also came at a price for Georgia on the offensive side of the ball. Senior wide receiver Tyler Simmons left with an apparent shoulder injury.

The shoulder issue was enough to remove Simmons from the game in the first half. Kirby Smart did not seem to be overly concerned about it’s severity in his post game press conference.

Defensively, Georgia held the Red Wolves to just 220 yards of total offense. They also were able to cause “havoc” on the Arkansas State offense.

The Bulldogs were able to sack quarterbacks Logan Bonner and Layne Hatcher four times. They also defended eight passes in this game.

Georgia’s defense posted seven tackles for a loss. defensive tackle Tyler Clark had the most, with one and a half.

Kirby Smart was able to accomplish most of what he’d hope to see out of his team on a Saturday afternoon. They won, looked focused and was able to keep his team relatively injury free.

Now, the attention can turn to Notre Dame. If the Bulldogs intensity is anywhere near where it was against Arkansas State, then it should be another satisfactory Saturday in Athens.