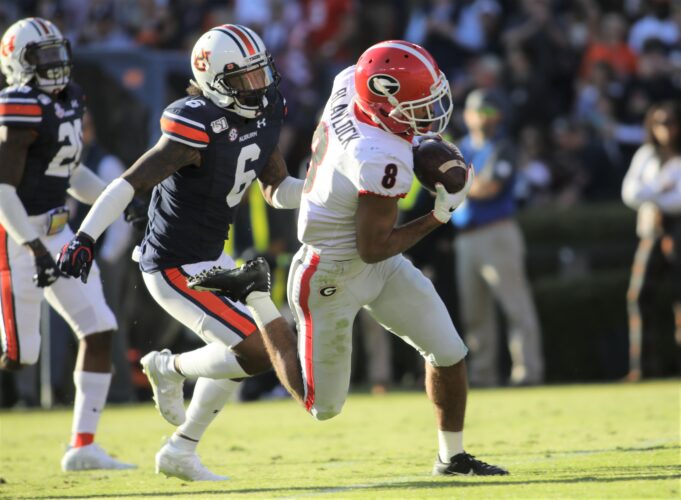 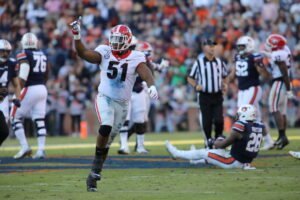 AUBURN, Ala. – Despite a fourth-quarter rally by Auburn, the fourth-ranked Georgia Bulldogs clinched their third-consecutive SEC Eastern Division championship Saturday afternoon with a 21-14 victory over the 12th-ranked Tigers in front of 87,451 fans at Jordan-Hare Stadium and a CBS television audience.

The Bulldogs’ victory was their third straight over the Tigers (7-3, 4-3 SEC), and gave them a 60-56-8 all-time advantage in the Deep South’s Oldest Rivalry. Georgia has prevailed in 12 of their last 15 meetings with Auburn.

Junior quarterback Jake Fromm went 13-for-28 with 110 yards and three touchdowns, while junior tailback D’Andre Swift eclipsed the century mark for the fourth time this season with 106 yards rushing on 17 carries. Swift’s night helped him pass 1,000 yards rushing for the second-consecutive season, making him the fifth Bulldog to do so and the first since Nick Chubb (2014, 2016-17).

The Georgia defense held Auburn to 329 total yards, their lowest home output of the season, and tallied eight tackles for loss and two sacks. Junior linebacker Monty Rice extended his team lead in tackles with 10 stops, including eight solo.

“It’s a credit to our staff and our players who work tremendously hard,” said head coach Kirby Smart. “That was a tough environment and a good football team. We had some big plays in the red area which was huge for us because we had not done that a lot before.”

On their opening possession, the Tigers quickly moved into Bulldog territory with a pair of first downs, but came away empty as Anders Carlson missed wide right from 47 yards out. With the miss, Georgia’s defense has yet to allow a score on the opponent’s first drive in each of the team’s first 10 outings.

With its first drive, Georgia went 3-and-out, but kicked off a day of tremendous punting as sophomore Jake Camarda pinned Auburn at the 2-yard line with a career-high 66-yard punt. Burdened with the poor field position, the Tigers quickly punted back, setting up Fromm’s 51-yard touchdown strike to freshman wide receiver Dominick Blaylock, capping off a 3-play, 61-yard drive.

After a series of punts from both teams, Auburn once again entered Georgia territory with a long drive in the second quarter, but their 4th-down conversion attempt was stopped at the Bulldog 37-yard line as the Georgia defense perfectly read Auburn’s wildcat formation. The Bulldog defense continued to assert itself later in the quarter as junior linebacker Jermaine Johnson forced a Bo Nix fumble that was recovered by junior safety Richard LeCounte at the Georgia 44-yard line, his second recovery of the season.

Although the Bulldogs were unsuccessful on the ensuing drive, they would close out the first half with a one-minute scoring drill, powered by Swift’s 26-yard rush to the Auburn 14-yard line. Three plays later, senior tailback Brian Herrien scored on a 5-yard screen pass from Fromm, concluding a 7-play, 81-yard drive that gave the Bulldogs a 14-0 lead entering the locker room.

“It ended up being the difference in the game,” said Smart. “I thought we handled the clock well. We were smart enough to not give them a possession, but steal a possession, and our kids did a good job of doing that.”

In the third quarter, the defense continued to stifle Auburn, forcing the Tigers to punt from the Georgia 39-yard line on their first drive. Following another punt, Georgia embarked on its longest drive of the afternoon, a 12-play, 88-yard sequence that effectively closed the quarter. After a touchdown pass to redshirt freshman wide receiver Kearis Jackson was overturned on review, Fromm found graduate tight end Eli Wolf for a 5-yard touchdown to make the score, 21-0.

The Tigers opened the fourth quarter with a 12-play drive of their own, culminating in a 3-yard touchdown pass from Nix to Eli Stove with 10:04 remaining in the game. On the ensuing kickoff, Auburn appeared to recover an onside kick at its own 46-yard line, but an illegal blocking penalty negated the play. Following a Georgia 3-and-out, Auburn continued its comeback with a 5-play, 57-yard drive that took just over a minute off the clock and ended with Nix rushing for a 2-yard touchdown, narrowing the Bulldogs’ lead to 21-14 with seven minutes remaining.

Following a Georgia punt, Auburn again moved down the field, though the Bulldogs nearly recovered a fumble near midfield. On 4th-and-5, Nix scrambled for an 8-yard gain, but he was unable to convert on his second 4th-down opportunity, overthrowing Harold Joiner on a screen pass. On the final Tiger possession, freshman defensive lineman Travon Walker clinched the win and division championship with a sack of Nix on 4th-and-10. For the game, Georgia held Auburn to 1-of-4 on 4th-down conversions.

The Bulldogs will conclude both their SEC and home slates next Saturday as they play host to Texas A&M at Dooley Field at Sanford Stadium. The first-ever conference matchup between the schools is scheduled for 3:30 p.m. on CBS.