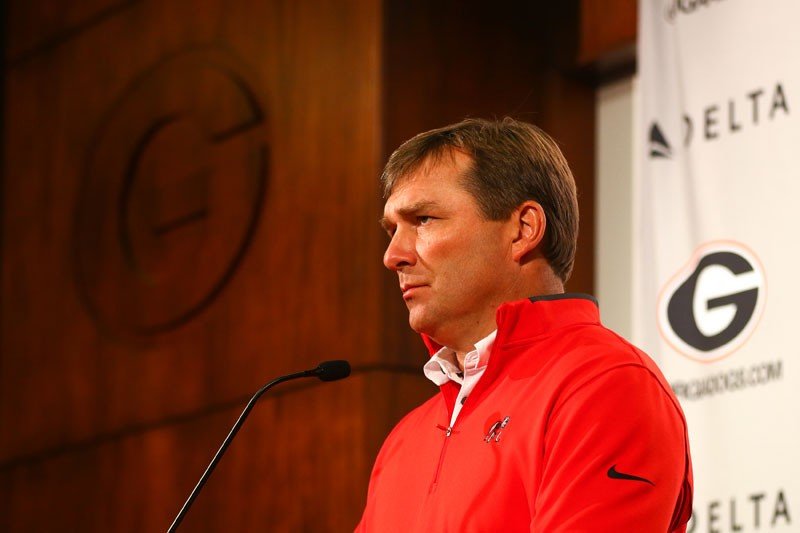 ATHENS —— Second-ranked Georgia continued its preparations for their SEC matchup at home against Vanderbilt with a 2-hour practice on Tuesday afternoon.  The Bulldogs stayed indoors for the entirety of Tuesday’s practice because of a gas main leak across Lumpkin Street from their outdoor fields.

‘’We had a good practice yesterday.  It was a little bit cooler outside and we were able to get a good practice in, get a good jump start on Vandy.  We were forced inside today, but the kids practiced hard, practiced fast. That’s for sure.  For some reason, when we’re inside they have more juice a little longer.  But we’re trying to get ready for Vandy, who’s got a really good program, good football team.  I thought the kids really focused today and I’m proud of them for that.  Trying to improve some of our downtrodden areas.

‘’We were forced to be inside.  We were told that we were not safe to be outside.  I would like to have been outside, but that practice is usually split.  It’s not like we’re usually outside all day.  But today we were inside all day.’’

How much did Vanderbilt’s game at Notre Dame factor into your preparation for this Saturday’s game?

‘’A lot.  There are some similarities between us and Notre Dame.  That was an interesting game.  I don’t know how many people actually know exactly how it happened.  They (Vandy) had a really fluky play where they’re going in to score in the first half, and they get a strip fumble on the one-foot line.  They turned one over in the end zone. Had a chance to win the game on the last drive.  I mean, they really really played well.  Played a really good football team and played a good football game.  But yeah, we’ve seen a lot of those tapes, as well as all of ‘em.’’

Comments on Tae Crowder’s progress from last year to this year?

‘’He’s come a long way, so where he was last year to where he is now, he’s had immense strides.  But he had a lot of strides to make.  So he started out as a really good athlete, good receiver who has good ball skills.  He had to get used to the contact at linebacker.  I still remember the first year I was here, he was over on the scout team, playing running back, and we started flipping him over.  We said, ‘hey, go play linebacker.’ Next thing you know, he started looking pretty good.  He spent all last year learning, helping out on special teams, and then this year he’s gotten better.  He’s big, he’s fast, he’s athletic.  He’s what you want a linebacker to be. He’s getting tougher.  So, he’s been a really good asset for us.

‘’I think it’s his position.  He plays what we call the ‘Money’ linebacker position, which follows the tight end usually, and that guy is usually flexed out in most offenses, so it’s not like he’s set to be open.  I mean, he is good at open, but he’s good in the core, too.  He does a good job there.  He’s a good space player.’’

What consideration was given when he (Crowder) changed his position?

‘’I would say that we had a bunch of good running backs.  At the time there was a good stable, I think.  Holyfield and Herrien were here.  They were in that first class of ours and we felt like they were going to be ahead of him.  And we felt like here’s a guy that can help our team.  I had him in camp at Alabama for three or four years and I always thought he was a defensive player.  He was just big, athletic and fast.  He was one of these receivers that grew into something else.  He kept growing into a back.  I think we thought he could get onto the field.  I didn’t know how long it would take him to learn the defense.  It’s not easy to play linebacker if you’ve never played it.  So he has made a long transition to get where he is, and that’s a credit to his patience, his work ethic, and he’s helped us on special teams along the way.’’

How much pride do you and your team take in the fact that you haven’t lost at home since 2016?

‘’It’s important to us.  To be honest, we haven’t even talked about that consecutive streak (10 games).  But I’m proud of it and certainly think that our fan base makes it hard on people to play here.  We want to keep that going.  Anytime you can protect your home turf, that becomes one of the most important things you can do.’’

What makes finally playing a night game so important to you?

‘’I’m excited for the players.  I think they enjoy it.  It’s cooler longer, so typically on our GPS system we get higher speeds at night.  Our fastest games last year were night games.  They sustain ‘em longer.  They might be just as fast in afternoon games, but not as long, not for as many yards.  That’s true for the other team, too.  So the game’s faster.  I think they enjoy it more.  I think the fan base enjoys it more.  There’s more of a build-up for it. So I think it’s good when you have a night game.  We haven’t had one yet.  If they were all at night, I’d probably want one in the afternoon.’’

There’s a UGA baseball player who stands accused of using some racial slurs directed at one of your football players during the game this past week.  What is your reaction to this and is this something you’ve addressed with your team in any way?

‘’No, I really haven’t.  If what I’ve read and heard is true, then it’s really unacceptable behavior.  It’s not who we are at Georgia.  We’re trying to build a program on tolerance and mutual respect.  You can’t control what other people say, but the expectation is that people who are part of our program, and attending our games, share the same beliefs that we do.  It’s sad that something like this would happen.  I’m disappointed, but it doesn’t affect our family, our unit, here and our kids have been great.  It’s not something I’ve had to address with them.  I’ve addressed it with Justin (Fields) and that’s the most important one.  Justin’s great.  Justin’s worried about Vanderbilt.’’

What goes into an offense having a ‘fast’ start in a game?

‘’I think executing.  When you think about it, I really think that in several games, we’ve started well.  Some games we haven’t.  Like I’ve told you, the hardest time to run the ball and move the ball is early in the game because the defense is usually ahead of the offense a little bit, from the speed of the game.  You go back and look last week, we ran the ball really well early.  The first two or three runs were eight, nine yards.  But you don’t feel good until you get points on those opening drives.  And I think that’s what you call starting fast.  Crazy enough, we’ve had two touchdowns on defense before offense.  I know our offensive players are really honed in on getting an opportunity to get some rhythm going and make some plays because we have the capability of being explosive.  But it usually comes when we have less mental errors.  So it’s not about what the other team does.  It’s about what we do.’’

How can Deandre Baker be an influence on the younger members of the secondary?

‘’I think confidence and talking to them.  I think so many players in the secondary look up to D-Bake because he’s such a talent, that he can affect those guys the right way.  Maybe the way he prepares for the game, the way he goes about the game.  D-Bake just keeps to himself. He’s a quiet guy.  He doesn’t really want to share much information.  He just wants to go play and he enjoys playing the game.  I think he can enlighten the other players by giving him some of his knowledge and experience.’’

Where is Terry Godwin now, after dealing with injuries in the offseason and through the start of this season?

‘’I think Terry has slowly but surely gotten healthier all year.  I still don’t know that Terry is at 100 percent.  His GPS numbers say he’s getting closer.  But here’s a guy that didn’t get to work out. The momentum that you spoke of (from last year) wasn’t there because all summer he couldn’t run and work out.  He had a painful injury.  He’s worked really hard to get back to where he is now.  I think he’s getting closer.  It’s really hard in season to get your legs back under you because you’re constantly running, and you have to practice to get better.  He recognizes that and he’s practicing hard.  I think as he gets more conditioning and more in shape he’s gonna help us out.  He had a huge block on one of Justin (Fields) touchdown runs.  He just completely removed the corner out of the picture and blocked really well.  So I’ve been very pleased with Terry, not his growth but just getting back to normal.’’

‘’As far as communication, you try to communicate the same, whether it’s Baker or Campbell.  When he (Tyson Campbell) needs help, me or J.R. (Reed) will step over, but it’s pretty rare.  He’s a dedicated freshman.  He’s tried to get everything he can as time has gone by.  We’re kind of the same, as far as covering the field.  Being able to split the defense in half and simplifying it.  It’s something we try to do.  No matter what side we’re on, we’re keeping everything in front of us and keeping everybody informed of all the plays, the calls. Trying to foresee what’s gonna happen before it happens, as far as the next play.  We just try to be the best we can.’’ 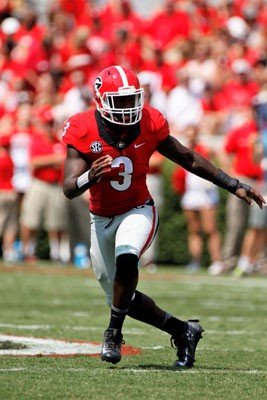 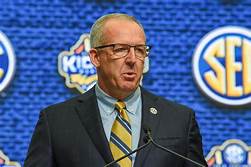 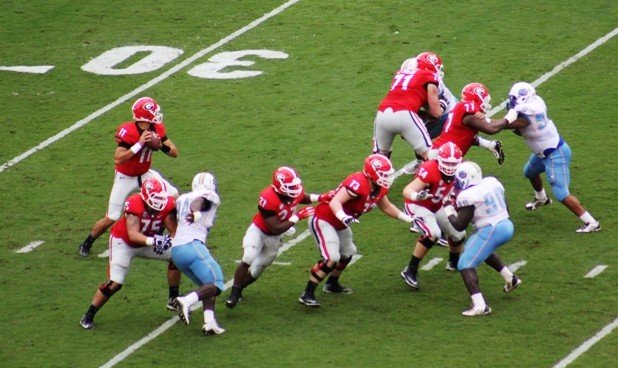 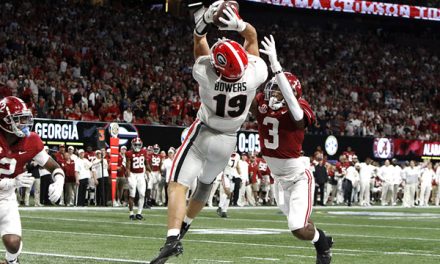