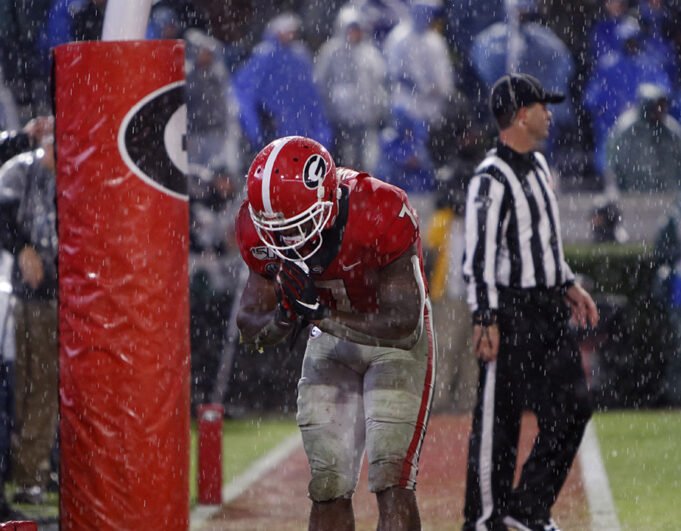 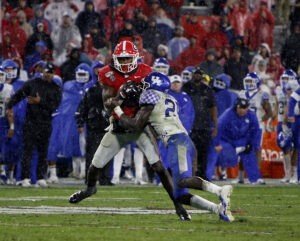 A pair of touchdowns from junior tailback D’Andre Swift and a third-quarter touchdown scamper from senior tailback Brian Herrien proved to be the difference for the Bulldogs. Swift finished the day with 179 total yards.

Georgia improves to 6-1 overall and 3-1 in the SEC ahead of its matchup against Florida on Nov. 2 in Jacksonville, Fla.

“You have to be patient with those type of elements,” head coach Kirby Smart said. “You’re not just going to run the ball down their throats or throw it 30-40 times in those conditions. It was a field position game, and we needed to win field position. In the second half, we did that, along with running the ball.”

The elements immediately impacted the opening quarter as both teams struggled to find momentum on offense. After each squad punted on their opening possessions, Kentucky entered Georgia territory with a 19-yard punt return, but their conversion attempt on 4th-and-2 was undone by a false start penalty and led to a punt.

The Bulldogs appeared to have finally broken into Wildcat territory midway through the second half as Fromm scrambled to the Kentucky 49-yard line, but the spot was changed following a review. On the ensuing 4th-and-1 at midfield, Fromm’s sneak was stopped at the line and Kentucky took over on downs. On their following possession, the Bulldogs again neared midfield with a pair of long runs, but a stalled offense led to a punt. For Georgia, it was the first scoreless half since a 10-0 loss at Alabama in 1991.

Kentucky opened the second half with the ball and proceeded to drive into Georgia’s side of the field, reaching the 27-yard line before a holding penalty coerced another punt. After a poor Wildcat punt set up the Bulldogs in Kentucky territory, Swift immediately scored with a 39-yard touchdown run, putting Georgia ahead 7-0 at the 6:20 mark of the third quarter.

On the ensuing Wildcat possession, the Bulldogs’ defense announced its arrival as senior safety J.R. Reed forced a fumble by Kentucky quarterback Lynn Bowden, Jr. that was recovered by junior safety Richard LeCounte at the Kentucky 31-yard line, the third recovery of his career. With an opportunity to assume control of the contest,Herrien scampered for an 8-yard touchdown run that capped off a 5-play, 31-yard drive and extended the lead to 14-0 with 1:54 to play in the third.

Needing a response, Kentucky got off to a strong start when senior kick returner Zach Johnson brought the kickoff back to the Georgia 40-yard line. A 21-yard Bowden rush placed the Wildcats in the red zone for the first time, but freshman running back Chris Rodriguez was unable to haul in a wide-open touchdown catch. After an incompletion, the Georgia front forced Bowden out of the pocket on fourth down and held the Wildcats out of the end zone.

Georgia opened the following drive deep in their own end, but a heavy emphasis on the run game brought the Bulldogs back into the Wildcat red zone. Swift’s 3-yard touchdown run with just over six minutes to go put the final touches on Georgia’s 21-0 win.