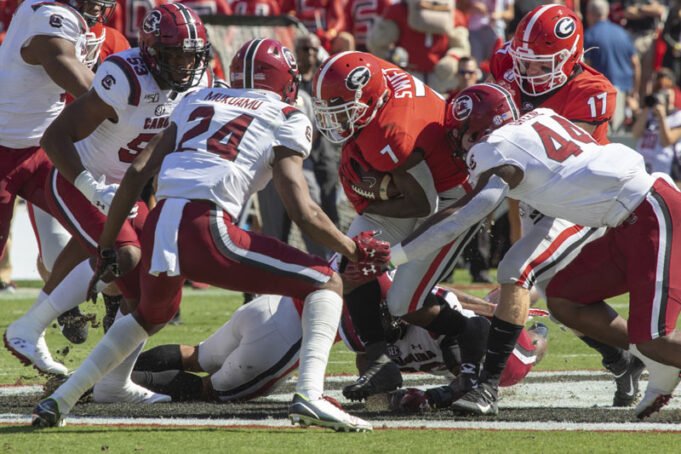 The loss marks Georgia’s first of the season and first home defeat since 2016. The Bulldogs are now 5-1 overall and 2-1 in the Southeastern Conference.

“Any time you get ready to play a football game, you have to set your jaw and go play physical,” head coach Kirby Smart said. “We didn’t do that. They played physical and attacked us. We’ve got to go out and help our players, and that starts with me.”

After trailing most of the game, Fromm directed a 13-play, 96 yard-yard drive that ended with a Demetris Robertson 6-yard TD reception in the back of the end zone to knot the score at 17-17 with 1:48 remaining.

The Gamecocks got the ball back with plenty of time to work with. Following a missed field goal, Georgia’s drive stalled on the ensuing possession, and the two teams went to overtime.

In the extra period, Fromm threw an interception on Georgia’s second play. South Carolina kicker Parker White then missed a 33-yard field goal on the Gamecocks’ next drive to send the game into a second overtime.

From there, the Gamecocks ran seven plays to set up a chip-shot for White. This time he knocked in from 24 yards to give his team a 20-17 lead. A 3-and-out on Georgia’s next possession set up Blankenship with his 42-yard attempt that went wide right and sealed the game for South Carolina.

The double-overtime thriller was set up by a back-and-forth regulation period.

After receiving the opening kickoff, the Bulldogs worked their way down field, but were stopped at the South Carolina 32-yard line. Blankenship came on to knock in a 50-yard field goal to put the Bulldogs ahead 3-0 in the first quarter.

Later in the opening frame, sophomore punter Jake Camarda recorded a career-long 66-yard punt to pin the Gamecocks at their own 7-yard line with just over three minutes left in the quarter.

Despite opening the drive deep in its own territory, South Carolina strung together a nine-play, 93-yard drive, highlighted by a 63-yard passing touchdown from Ryan Hilinski to Bryan Edwards to give the Gamecocks the 7-3 lead with 1:58 left in the first.

Georgia opened the second quarter by completing a nine-play, 75-yard drive capped by a one-yard rushing touchdown by junior D’Andre Swift to put the Bulldogs back in front, 10-7.  The Gamecocks evened the score with three minutes left in the half on a 49-yard field goal by White.

With a minute left in the half, South Carolina’s Israel Mukuamu intercepted a Fromm pass and returned it 53 yards to give the Gamecocks the 17-10 advantage. The interception was the first by the Georgia junior quarterback in 2019.

In the final seconds of the first half, South Carolina’s D.J. Wonnum blocked a 53-yard field goal attempt by Blankenship, ending the half with the Gamecocks ahead 17-10 and snapping Blankenship’s 12-for-12 streak to begin the season.

Both teams went scoreless for most the second quarter until Robertson’s game-tying grab that helped send the game into overtime.

Next up, Georgia host Kentucky next Saturday, Oct. 19.