“Clean, Old-Fashioned Hate” (although many will say the hate is far from clean) will ensue Saturday in Athens between intrastate rivals Georgia and Georgia Tech. The teams enter with identical records both overall and in their respective conferences (9-2, 6-2); however, the 16th-ranked Yellow Jackets have already clinched a spot in the ACC title game, whereas the 8th-ranked Bulldogs must wait until Friday to know if they’ll be playing in the SEC Championship or not.Coach Mark Richt is a spectacular 12-1 against Tech, losing only in 2008 when his Bulldogs were upset as more than a touchdown favorite in Athens. This season’s meeting will match the highest combined AP Poll rankings in the rivalry in nearly 50 years (1966: No. 5 GA Tech vs. No. 7 Georgia). Still, there has been some question whether the Bulldogs (currently, a 12.5-point favorite) will be fully focused Saturday, considering they’ll already know if there is a game to be played the following week or not.”I think around here, just the fact that Coach Richt has lost to [Georgia Tech] before and knowing what that means and what that feels like, I don’t think [the coaches] allow [a lack of passion] to happen,” said receiver Chris Conley, who will be one of 27 seniors making their last appearance in Sanford Stadium. “I think the team learns how to get up for this game.”When the Dawgs Have the Ball: Last season, Georgia’s offense was relatively stagnant early on at Georgia Tech; the team trailed 20-0 late in the second quarter before finally coming alive to win in overtime, 41-34. But this year, the Bulldogs should have little trouble moving the ball, and move the ball from the very beginning.

“I think [the Georgia Tech defense] did a good job against us last year,” senior center David Andrews said. “We struggled at times last year. We’ve just got to go out this year and earn the right to win and come out there and have a physical game.”

Andrews and his big, physical fellow linemen pave the way for arguably the best running attack in UGA football history. Led by tailback Nick Chubb, who is seeking his seventh consecutive 100-yard rushing performance, Georgia’s ground game will face a Yellow Jacket run defense which allowed Wofford, Georgia Southern, and Duke to each rush for more than 240 yards. What’s more, Georgia Tech is yielding a lofty 5.09 yards per rush; only two FBS teams currently with winning records—South Carolina and Rutgers, both with mere 6-5 marks—are yielding more per carry.

Although the Bulldogs rarely turn the football over, committing just eight turnovers this season—second-fewest in the FBS—they have to be extra careful to hold onto the ball against the Jackets. Remarkably, Georgia Tech has scored six touchdowns this season on interception and fumble returns, while averaging 10.5 points per game off turnovers.

When the Jackets Have the Ball: Georgia Tech’s triple-option offense has produced similar results in 2014 as previous seasons under Coach Paul Johnson: many points, a lot of rushing yards, and many backs involved in its success. Currently, nine different Jackets have carried the ball at least 15 times this season for more than 100 yards. Their leading rusher, quarterback Justin Thomas (827 yds), is perhaps slightly different than Tech’s previous triple-option signal callers as he actually is an accurate and dangerous passer. Thomas would rank 6th in the FBS in passing efficiency (161.22) if he averaged just 1.8 more pass attempts per contest (need 15.0 to be eligible; Thomas averages 13.2).

Georgia’s defensive coaches and most of their defenders will confront an offense like they’ve never seen before from the Yellow Jackets.

“[Defensive Coordinator] Jeremy [Pruitt] has had experience, and I think all of our coaches have had some experience defending this type of offense, but going head to head with Georgia Tech, I don’t believe they did…” Richt said. “So you know, it’ll be the first shot out of the cannon, so to speak, for this staff to go against that offense here at Georgia Tech.”

For what it’s worth, although Georgia Tech has lost five consecutive to Georgia, the Yellow Jacket offense has averaged a staggering 286 rushing yards per game against the Bulldogs during the losing streak. Nonetheless, this season’s Georgia defense is considered not only improved from previous editions, but steadily improving as the season has progressed.

“I think our confidence has always been there,” said nose tackle Mike Thornton when asked about the defense’s improvement. “I don’t think we’ve ever shied away from anything, any team. … But every week we have to come out and play our hardest game.”

Although Georgia’s defense is acknowledged for its steady improvement, the Bulldogs have allowed averages of 243 rushing yards per contest and 5.2 yards per rush their last four games after having what was considered one of the best run defenses in the SEC.

Special Teams: For the season, 35 percent of Marshall Morgan’s kickoffs have been touchbacks, which is slightly below the conference average of 39 percent. But, against Georgia Tech, the Georgia placekicker might have to be better than average.

The Yellow Jackets rank 19th in the FBS in kickoff return average (23.7); top returner Jamal Gordon is 14th in the nation, averaging nearly 27 yards per kickoff return. The Bulldogs can ill-afford to allow extra yardage on returns to a team whose offense will already presumably be able to move the ball.

* Georgia Tech is within reach of breaking the FBS single-season record for yards per pass completion: 19.1 by Houston in 1968 (min. 100 completions). Currently, the Jackets are averaging 18.3 yards per catch (85 completions entering game).

* If the Bulldogs score 20+ points against Georgia Tech, it’ll mark back-to-back campaigns in which Georgia scored at least 20 points in every regular-season game after having never accomplished as much in any regular season prior to 2013.

DawgTime Prediction: On Tuesday, Richt offered his opinion on “Clean, Old-Fashioned Hate”: “I have done my best to explain, you know, kind of how this game goes, and the emotion of the game and how relentless Georgia Tech is in how they go about their business, and it’s kind of—it’s a game where you’ve gotta be—you’ve gotta be tough to play in this game.”

The Jackets might be “relentless,” and, as mentioned, they have been able to rush for an average of nearly 300 yards against the Bulldogs even when losing the annual affair since 2008. However, during the losing streak, they have averaged an un-Tech-like 23.8 points per game.

Like seemingly always, the Yellow Jackets should be able to move the ball, and may keep the game close for a while; however, simply put, Georgia is tough —tougher and more physical than Tech. Plus, no matter the outcome of the Arkansas-Missouri game, you can count on the Bulldogs being focused on the Jackets—perhaps, more focused and having more hate than for any other opponent this season. Richt improves to 13-1 against Tech, 37 to 20. 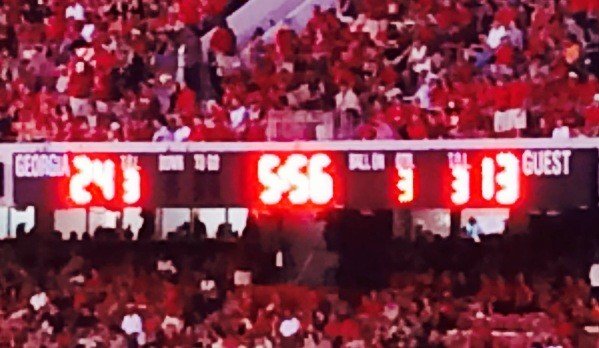 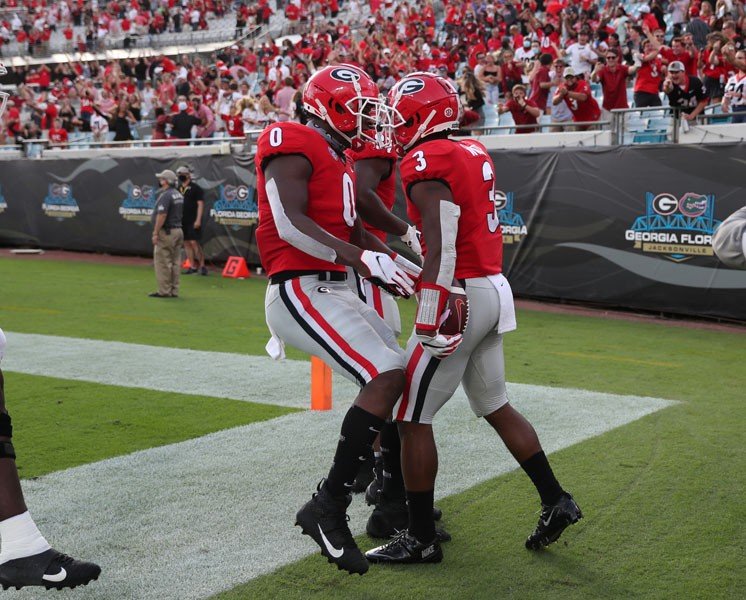 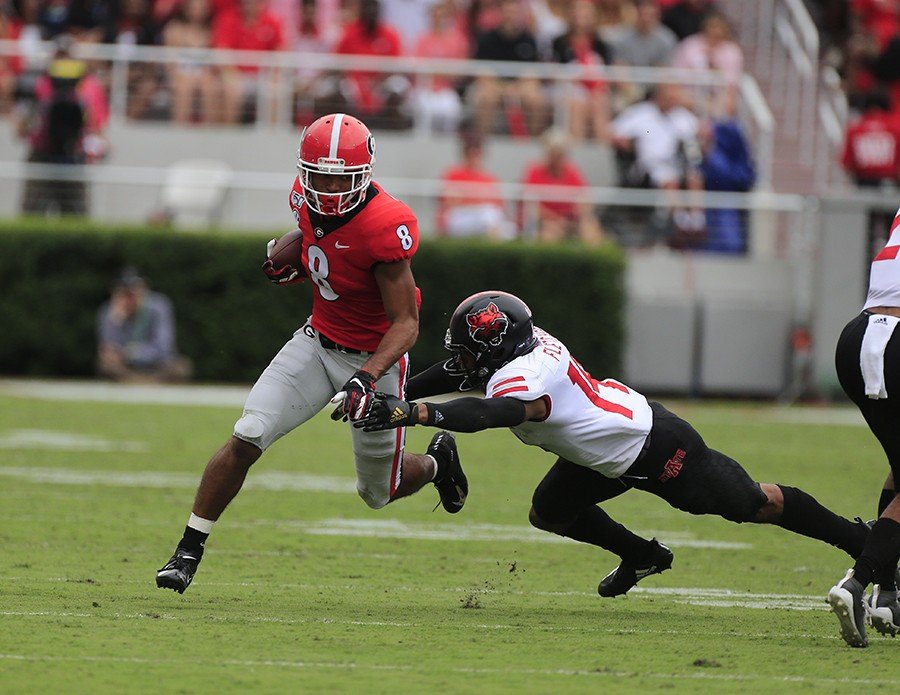 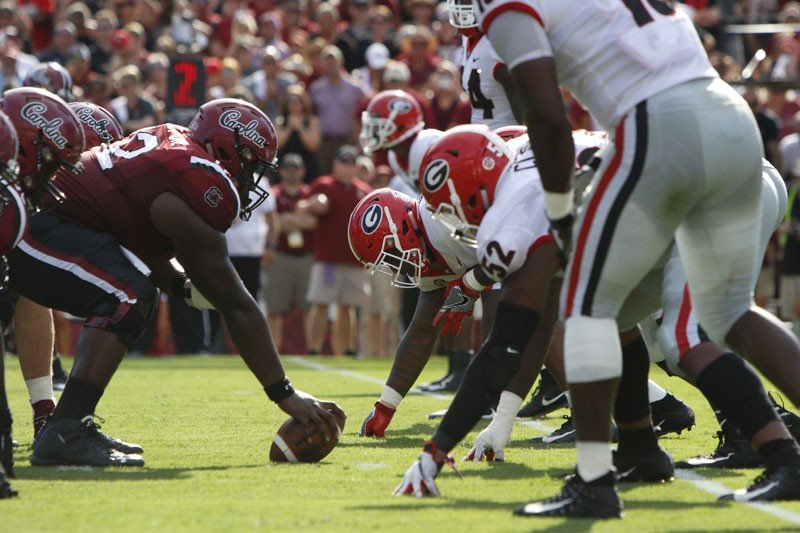