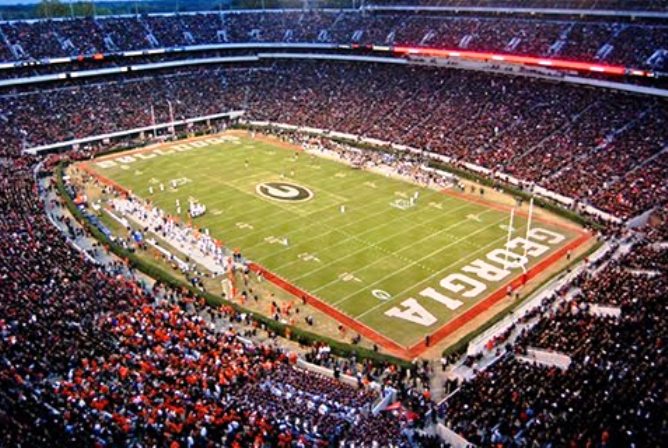 What’s New at Sanford Stadium in 2016

The Georgia Bulldogs will open the 2016 season against Nicholls in Sanford Stadium on Saturday, September 10. Here are a few new things the Bulldog Nation can look forward to when attending games ‘tween the hedges this season.

I did not bring any cash, am I still able to get something from the concession stand?

Yes, all concession stands take VISA, MasterCard, Discover and American Express credit cards.  The credit card Point-Of-Sale system that was installed at all concession stands for the 2015 season was a big success.  So much, that ATM usage dropped significantly and is now no longer available inside the stadium.  If you do need cash on gameday, ATMs are still available outside the stadium in the Tate Center plaza.  However, you will need to get cash before you enter the stadium.

Any changes with the concessions stands this year?

A number of enhancements have been made for the upcoming season, with the goal of making concession transactions occur as quickly as possible.

The following changes have been to ALL concessions stands at Sanford Stadium:

No longer offering free refills on beverages and popcorn

Concessions pricing on all items has been rounded off to the dollar (.00)

VISA, Mastercard, Discover and American Express are accepted at all concessions stands

The following changes have been made to the concessions stands on the 100 Level:

Adding 60+ hawkers (vendors) and at least 20+ exclusively on the South Side 100 Level to push out items such as beverages and snacks.  These additional hawkers will increase our total to over 150 throughout the stadium.

The following “concept stands” have been added to the concessions lineup:

Line formers (stanchions) will be experimented with at selected stands in Reed Plaza and Gate 6 Plaza during the home opener vs. Nicholls

The following changes have been made to the concessions stands on the 200 & 300 Levels:

All screens have been removed and replaced with roll down windows

With the construction of the new Indoor Athletic Facility, will I still be able to watch the Redcoats rehearse Saturday morning?

The ongoing construction of the Indoor Athletic Facility will cause the Redcoat Band to relocate their Saturday morning rehearsal.  The Redcoats will now hold their gameday rehearsal at their practice field, located at the UGA Intramural Fields, off of College Station Road.  For more information on schedules, please contact the Redcoat Band office: 706-542-1505.

Is there any other construction that is impacting anything?

The exterior of the stadium’s Gate 9 has been renovated to address pedestrian egress concerns.  The pathway from Gate 9 to Sanford Drive has been widened, the previous staircase was replaced with a wider, safer version and permanent lighting has been added.

There were a few stories during the summer about the football team wearing black jerseys.  Should we be wearing certain colors at specific games?

Those early season games can be hot.  Is there any place inside the stadium we can cool off?

Misting tents will be available for fans at Gates 7, 10 and Reed Plaza at the following home games:

I don’t want to carry my own seat cushion to the game.  Can I still rent one from the stadium?

Stadium seatbacks will be available for lease as a full season package for $60.  On gamedays only and subject to availability, seatbacks can be leased for $10 on a single game basis.

Returning for the 2016 season is the MVP Seatback available for all seats located in the Club Level sections of Sanford Stadium.

On gamedays, fans wanting to lease seatbacks for a single game or season and needing assistance with their seatbacks, can visit any of the customer service locations at Gates 2, 6, 7 and 9.

I forgot my hat.  Where can I buy one at the stadium?

Sanford Shops will feature officially licensed merchandise and be located near Gate 7 and throughout Reed Plaza. An additional stand will be located outside the stadium on Sanford Drive Bridge and will be open pregame and postgame.

If someone in our group gets separated from the rest, how can they find us?

You can always use one of the many CSC stadium staff or law enforcement officers inside the stadium to help locate lost guests.  New this year, all patrons will have the capability to register themselves, children or other guest for the Tag-A-Fan program.  Located at all in-stadium Bulldog Information Stations (located at Gates 2, 4, 6, 7 and 9), the guest will receive a wristband with space available to write their name, seat location and contact information.  If the guest becomes lost, the wristband will give an event staff employee or police officer the necessary information to escort the guest back to his/her seat.

If I need some help at the stadium, how can I find someone?

Law enforcement and CSC staff will be on hand inside the stadium to answer questions and handle any concerns.  Distinctive Stadium Response Teams will be pairs of CSC staff roaming the stadium and will be visible by their green and black uniform.  If at any time you need assistance, please find the nearest CSC staff member.

You can also text your question or issue to the stadium’s Command Post.  Simply text “DAWGS <space> the issue and location of incident” to 69050.  Please note that standard SMS rates apply.

I’m a UGA student and have to use my UGAID to enter the stadium.  How do I know where to go in the stadium or sit to watch the game?

In 2015, changes were implemented for student ticket entry into the stadium, and the Athletic Association will use these policies again for 2016.  Stadium staff will be enforcing student ticket only entry to Gate 1 and Gate 3.  General tickets will be accepted at select lines of Gate 4A.

UGA Students using their UGA ID for entry into the game must enter a specific student gate to sit in one of the general areas allotted for student seating.

Enter Gate 1 to sit in Sections 138-143, the West Endzone under the videoboard

I just got to Athens and my normal parking lot is full.  How can I find out where to park?

To better answer questions of our guests on gameday, you can call our parking helpline to get information related to campus parking lots.  The operator will not be able to help with selling of open spaces or questions related to Hartman Fund allocations.  But the operator will assist with items such as, directions, public handicap lot availability, the East Campus game day shuttle and other gameday information.

Will there be any special promotions at this year’s games?

There are a number of recognitions that will be taking place throughout the season.  Here are just a few:

During the Vanderbilt game on October 15, Women’s Swimming & Diving will be honored for winning the NCAA Championship.  Members of the swimming, gymnastics and track programs will also be recognized for the their individual national championship performances.

The Men’s Tennis and Men’s Golf teams will be honored at Auburn game on November 12.

Current student-athletes who competed and all former Bulldogs that medaled in the 2016 Olympics in Rio will be invited to the October 15 game versus Vanderbilt to be recognized.

During the Vanderbilt game on October 15, UGA Athletic Association will recognize the newest inductees to the Circle of Honor. This class includes former football player John Little, Stefanie Williams from women’s swimming and Coco & Kelly Miller from women’s basketball.

The Circle of Honor is designed to recognize and pay tribute to extraordinary student-athletes and coaches who by their performance and conduct have brought honor to the university and themselves, and who by their actions have contributed to the tradition of the Georgia Bulldogs. The criteria also stipulate that each recipient has earned his or her academic degree.

During the Louisiana-Lafayette game on November 19, UGA Athletic Association will host our Annual Military Appreciation Day. 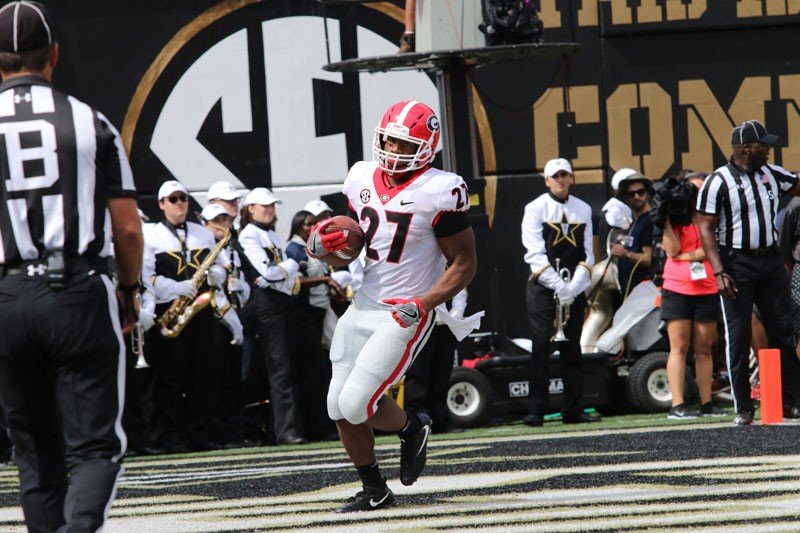 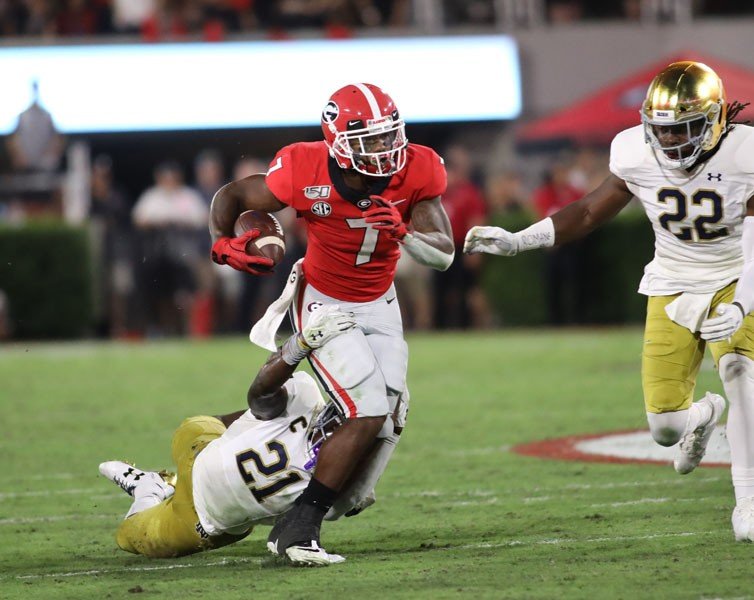